Tips for Installing a Television Over a Fireplace 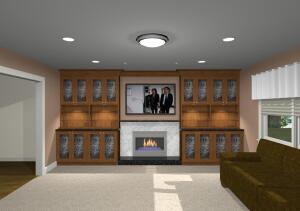 In many living and family room designs, it might seem like the best place to install the flat screen television is above the fireplace. But before you do that, the Chimney Safety Institute of America advises you to take a few precautions.

Rob Sabin, editor-in-chief of Home Theater Magazine/HomeTheater.com, suggests using an electronic thermometer with an outdoor probe and taping the probe to the wall above the fireplace, then setting the fireplace at its highest setting and checking the temperature. “Anything over 85 to 90 degrees or so should be considered less than ideal for electronics, whether it’s inside a cabinet or on a wall,” Sabin says. “Over time, a TV that is repeatedly exposed to rising hot air over 100 degrees could see its life unexpectedly shortened and possibly even experience some misshaping of its plastic cabinetry. If you’re using the television and have the display panel and circuitry active while the fire is going in that type of installation, you’re asking for extra trouble, particularly so with plasma TVs that tend to run hotter than the LED LCD models.”

Sabin offers some tips and suggestions:

Bob Vila's 10 "Must Do" Projects for October Summer's gone and autumn's knocking at the door. The month of October brings colorful leaves, cool breezes, and Halloween trick-or-treaters. It's also the perfect time to finish outdoor maintenance projects, brush up on your fire safety knowledge, and winterize your lawn before the cold temperatures really set in. Click through to take a look at my ten must do projects for this month.

Many deck builders have told me that they rarely build wood rails anymore. Their customers are opting for low-maintenance finishes, and they're installing manufactured rail kits and components made from vinyl or composites. As Matt Breyer ofBreyer Construction and Landscape, in Reading, Pa., explains, "Of the 100+ decks we build each year, we might do five that have wood railings." Breyer says that even when installing a standard PT deck with a wood railing, he prefers to use Deckorators metal balusters, simply for ease of maintenance.

But plenty of customers and deck builders still prefer site-built wood railings. They may take longer to build and require a little extra maintenance, but in return they offer more design options and a chance to stamp your projects with a signature look. Take a look at the railings featured here and see if you don't agree that it's a fair exchange.

This railing was built with redwood and has a paint finish, though the same design could be built with reinforced composite balusters.

While I think it would be expensive to build and maintain and wouldn't be a good choice in a freeze/thaw climate, like in New England or the Midwest, one of my favorite designs is this elegant painted rail byGary Cherene of Redondo Beach, Calif. Cherene says he can assemble the balustrade using hollow Trex composite balusters reinforced with wood, though the one shown here was built with redwood. He cuts the vertical balusters and horizontal crosspieces from S4S 1 3/8-inch by 1 3/8-inch stock, and uses standard 2x4 and 2x6 stock for the rails. He profiles the edges of the 2x6 cap rail using either an ogee or a classical bit.

According to Cherene, the trickiest part is installing the crosspieces so that they're perfectly aligned. He does this by first fastening the vertical balusters to the top and bottom 2x4 rails, then snapping a pair of chalklines to mark the locations for the crosspieces. As he fastens them along his marks to the balusters with 3-inch-long stainless steel toe screws, he continually checks their alignment by eye.

Cherene typically contracts with a professional painter to spray the completed rails in place with a primer coat and three finish coats of high-quality exterior latex paint.

Even though these posts and rails are wood, they're designed to accommodate the electrical wiring needed for deck lighting.

John Paulin's railing system is designed to accommodate deck lighting and various types of balusters as well as cable infill. The key is his two-part upper rail assembly, which he has custom-fabricated from clear, vertical-grain pressure-treated southern yellow pine.

The lower, 2x4 subrail has a 1/2-inch-deep by 1-inch-wide wiring chase routed into its upper surface. A corresponding 1/4-inch-deep chase is routed into the underside of a 2x6 cap rail that fits on top of the subrail, allowing the wiring to run unseen over the rail posts. The underside of the cap rail also has a 1/8-inch-deep by 3 1/2-inch-wide channel that creates a keyway for the subrail. To accommodate wiring that leads below deck or to a post-mounted fixture, he rips his posts into two pieces and routs 1/4-inch-deep channels into the center of each cut edge.

Most of Paulin's customers prefer his double top-rail design, in which a 4-inch gap separates the lower balustrade from the upper handrail. He typically builds the rail sections using standard 26-inch-high metal or wood balusters and 36 1/2-inch-high railing posts. Once the 2x6 cap rails are added to the assembly, the top of the railing is about 38 inches above the decking.

Post spacing is typically no more than 4 feet on-center, though Paulin says he'll increase that to 4 feet 6 inches when using stronger, vertical-grain PT pine material. To prevent sagging, he supports the middle of the longer rail section with a block.

The tile inlay in this cedar rail was installed using offcuts from the deck's travertine tile sitting area (shown in the background), mixed in with pieces from other tile projects.

According to landscape designerBruce Zaretsky, the tile inlay shown here was a spontaneous design by his crew, and a surprise for his client. Following the installation of a travertine inlay "carpet" in a deck project, his carpentry foreman had some leftover blue floor tile on hand, and his crew decided to combine it with leftover travertine offcuts to create the inlay in the deck's 2x6 cedar cap rail.

Later, the client sealed the cedar and tile with a coat of polyurethane to keep it waterproof. This proved to be a mistake, as the sealer eventually yellowed and flaked off. Now, sealer is applied just to the wood and not to the tile, which has a silicone bead run over the grout lines to help keep water out.

In this railing design, the upper and lower rails were milled to match the mahogany decking. The balusters are painted fir, and attached with screws and nails to PVC subrails.

Emanuel Silva of Silva Lightning Builders in North Andover, Mass., has been tweaking his classic rail design for years to continually improve its ability to stand up to the Boston area's harsh climate. It can be built with either wood or composite materials; in the version shown here, the upper and lower rails were made of 2x4 mahogany to match the decking, while the 1 3/8-inch by 1 3/8-inch balusters were painted fir. Silva cut the 1/2-inch by 1 1/2-inch subrails from PVC sheet goods, along with the column and post wraps and porch trim.

First to be installed were the upper and lower mahogany rails, which Silva had dressed up with a beaded profile and prefinished with a couple of coats of Penofin. He fastened the rails to the posts with pairs of 2 1/2-inch-long Kreg HD heavy-duty coated pocket screws, locating the holes so they would be hidden by the subrails once the railing inserts were installed. Silva notes that the screws must be long enough to penetrate both the PVC trim and the structural PT posts. He likes to wrap the posts with Grace Ice & Watershield SAF membrane, because it self-seals around the screws and helps keep moisture out of the posts.

When he installed the rail inserts, he fastened them to the top and bottom rails with stainless steel screws about 8 inches on-center. Silva says he occasionally predrills holes for the screws and plugs the holes, but usually he just overdrives the screws a little and uses filler to conceal the holes. One thing he doesn't do is the finish painting; he subs that out.

This rail design features a double top rail made of cedar and short upper balusters made from 3/4-inch diameter copper plumbing pipe.

One way to dress up a standard PT rail system is to add copper. Oregon deck builder Mac MacDonald cut Type M 3/4-inch diameter copper tubing (typically used for domestic water systems and widely available at hardware and building supply stores) into 4 1/2-inch lengths and inserted them into holes bored into the upper surface of a 32-inch-high guardrail. He then installed the upper caprail, which has corresponding 1/4-inch-deep holes cut into its underside. Unlike the posts, subrails, and balusters, the lower, intermediate, and upper rails were made of red cedar, and were prefinished with an exterior polyurethane varnish. A horizontal blocking detail let into the balustrade adds an interesting visual element to the rail. Carefully cut lap joints were required to avoid weakening the balusters.

Andrew Wormer is the editor of PDB.